She resembles a pink seasnail.

A magazine preview shows a more in-between concept of the older Super transformation and the final version, her legs match more the final version, but her head is still identical to the initial concept seen on the poster. The colours are closer to the anime version in addition. Also, her powers are "previewed" in the same magazine as different.

When trying to get Kyoichiro's attention, she goes into her shell and comes out with a more lady-like appearance, which resembles her face in her original planned Super form. She also is seen a few episodes with wings like a fairy.

In episode 1, episode 2 and episode 23, a scene shows that at one point, Ammon had a brown shell. This is shown also in the early promo art, wherein her shell was light brown, though her head was still pink.

reconstruction of the pan shot of Super Ammon, episode 18

Ammon in the manga

all 3 forms in another concept design

Ammon joined Kyoichiro through fear of being alone and because after he saved her she developed a crush on him. Though she did run away from him at one point in the series, she was otherwise loyal and protective of him. She even stayed by his side after he dismissed her in episode 32 when he was being controlled by Deathdas and also when he quit the Time Police. She was also confident that Kyoichiro would rescue her when she and T.P. Lady were taken by the Masked Man. She adores attention and does not like to fool around like many of the other Time Shifters, making her quite mature acting in comparison.

She despises Kyoichiro's affection for Yamato Sora, and after she joins as his partner, becomes the primary reason for most of his accidents either directly (e.g. kissing him in an attempt to get his affection) or indirectly (e.g distracting him while running, causing him to run into a tree). In some cases, she will shift into her shell and reappear with a more alluring appearance, though Kyoichiro completely ignores her attempts to get noticed most of the time.

When afriad, she hides in her shell. In the Japanese dub she often refers to herself in 1st person as "Am-chan" when she speaks (e.g."Am-chan thinks they (referring to Dyna and Mite) are wasted on you ( referring to T.P. Lady)"). The only other Shifter to do this is Nioja.

Ammon has the ability to draw life energy from one object by kissing it and place it in another, bringing that object to life. She can also hide inside her shell to defend herself and floats at shoulder height most of the time.

In the Japanese dub, she is one of the few Shifters able to communicate with humans, however, she was the only one of the 3 who could do so who shouldn't have been able to do so according to Toki-G. 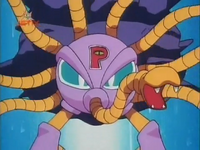 Anokoku resembles a tentacled hermit crab with a beak-like mouth. This version of Ammon is only capable of draining energy. Her tentacles act as whips. In the Japanese dub, this is the only time Ammon doesn't attempt to communicate with humans and she only says "Ankō", which is taken from her name "Ankōku (アンコーク)". 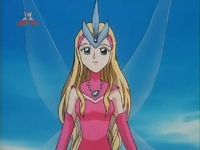 Super Ammon is a fairy/goddess-like being. This version of Ammon has the power to heal wounds. She was also able to create a beam of light to protect Genshi with and block Kyoichiro's attack in Episode 32.

Ammon never speaks in the manga but appears briefly in chapter 1. She is later seen in Chapter 4 with Wolfen and is by Kyoichiro's side having been entrusted to him. She later is also seen with him at the end of chapter 6 when Kyoichiro is seen holding a script.

Ammonwas found in episode 12, staying with Vlad Țepeș. According to her own words, she had no memory of her past life and only remembered waking up in the castle. She decided to stay with the count because he was lonely and she feared being alone herself. Genshi was told of her location, but it was noted no one actually knew what powers she had. After their arrival, Genshi soon became friends with the count, because count Vlad paid too much attention to Genshi and his friends, she ran away.

She was attacked by wolves, but Narugami Kyoichiro protected her. After T.P. Lady showed up Kyoichiro kept her from falling into T.P.Lady's hands. After T.P. Lady was defeated, Ammon saw that the Count had saved the local village and gained the villagers trust at last. Since he was no longer alone, she decided to follow Kyoichiro rather then return with Genshi.

Ammon became Kyoichiro's partner and accompanied him wherever he went. For a while, neither of the pair were seen following Genshi until episode 18. Ammon got fed up with Kyoichiro ignoring her and focusing on his work of observing and monitoring Genshi and the Time Shifters. She ran away from him and wondered off to a nearby park. She was found by T.P. Lady and her henchmen and was stamped with the P-stamp. T.P. Lady took her back in time to China during the period in which the tomb of Qin Shi Huang was still being built.

Genshi and his friend arrive and attempt to rescue Ammon, but Ammon brings Qin Shi Huang's Terracotta Army to life to fight Genshi. When Narugami Kyoichiro arrives, he refuses to let Genshi fight Ammon and instead attempts to deal with her. After T.P.Lady ordered her to transform into Ankoku, Kyoichiro dodges Ammon's attacks while trying to get through to her.

Eventually he stops fighting and lets Ammon drain him of his energy. When Ankoku falls over, Kyoichiro attempts to reach her one last time and is whacked by her tentacles for his efforts. He cries and collapses, causing her to transform from Ankoku to Super Ammon. Ammon heals the wound on Kyoichiro's face she gave him from whacking him with her tentacles and takes Kyoichiro back to their home in the 25th century. When Kyoichiro awakens, she has no memory of the events that took place that day. After Genshi and his friends arrive to check up on Kyoichiro, Ammon reveals to them that Kyoichiro is descended from Vampires, causing Kyoichiro to have to reassure them he doesn't do anything like suck blood.

In Episode 20, she tries to convince Kyoichiro to capture Elekin, when he refuses to interfere with Genshi's own mission, she kidnaps Elekin to impress Kyoichiro anyway. Before he gets to take Elekin to him, Petra catches up with her and Elekin is taken from Ammon. Later Elekin is transformed and attacks Genshi, Kyoichiro is convinced to help when Sarah pleads with him. Ammon tries to help Genshi and Kyoichiro and is zapped with electricity for her efforts. After Elekin is changed by to normal, she and Kyoichiro are seen on a tower talking. When Kyoichiro forgives Ammon for her actions, she accidentally knocks him off the tower.

Her name follows the normal Shifter naming scheme wherein a word is used to base the name upon + an extra sound is added, in this case the English word "Am" (which refers to oneself in a 1st person singular) is used + the sound "mon". "Am" refers to how she is very self centered, putting herself at the center of attention. The latter half of her name, "Mon", is also a french word, it translates into English as the word "my", which is yet another self referencing term.

When she says her normal phrase of "Am-chan", she is literally saying "Me-chan" or "I-chan" to make herself sound more important then she is. This is also notable because normally a Japanese speaker would refer to themselves in 3rd person, not 1st person (in English a person would refer to themselves in 1st person normally and not 3rd person). She also sometimes says "chu" which is Japanese onomatopoeia for the sound of kissing.

Her name is also a play on words as she looks like a Ammonoidea ("アンモナイト", meaning "ammonite" in Japanese).

Her bad transformations name of "Amkoku" is also a Japanese phonetic play on words using a non-Japanese word, it is taken from the English word "Conch", another type of seasnail. She is literally saying in this form "I conch".

Her english name of "Bindi" is likely a reference to the jewel on her forehead, which resembles a Bindi mark.