His form is based on a chick.

Artie, after being stamped 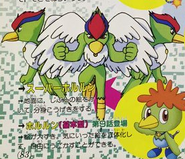 preview of normal and Super transformation

Artie has the unique ability to bring painting to life, his abilities are therefore the opposite of Plumella's own art-based abilities. He also was shown to have the ability to awaken the artistic skills within someone. 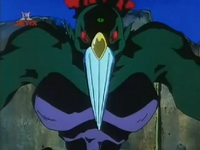 Artie-kon has the ability to carved multiple statues of himself out of stone. His beak is also a drill 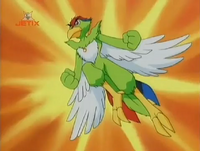 Artie Master is a agile flyer.

His name follows the typical naming scheme of the Shifters, being made up of a word and a sound. "Horu" is a reference to "horn" ("ホルン") + the triphonetic sound "run" "ルン". This refers to the egg tooth on the break of a chick when it is born, often referred to as a "horn" in many languages. It is likely the reason why he is portrayed as a chick. The similarities are drawn to chipping away at statues using tools such as a chisel.

His name could be a reference to Horace Lecoq de Boisbaudran, the name of the man who taught Auguste Rodin sculpture, as "Horurun" borrows the first two letters of both "Horace" and "Lecoq" ("ホ" from "Horace" and "ル" from "Lecoq" which is written as "rukokku" in Japanese).