He resembles a Baseball glove and baseball.

He is based on a roaster by design, complete with beaked mouth, the fingers are based on the roasters crest.

Preview of all 3 forms

Batterball gets depressed if he receives a loosing streak, but can pick himself up with encouragement. In episode 13, he was also seen crying with happiness.

Batterball is mostly a baseball focused Shifter, though has the power to give anyone the edge in any sport. He can control objects such as baseballs as well, essentially using them to "cheat" if necessary.

In the manga, when heated by tough competition. He becomes highly motivated which makes him fired up, flames appear in the pupils of his eyes and he cries with happiness. He looses this motivation if there is no challenge to be met. He can make the baseballs come alive, causing them to do what they please. 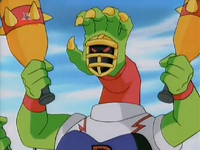 He gains the ability to turn others into baseballs, as well as fire a large amount of baseballs at targets within a short period of time. 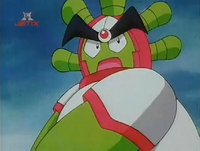 He gains a powerful strike which sends flaming baseballs at a target. These baseballs can circle a target without fallng.

He was first shown in Episode 11, where he had befriended a young Babe Ruth.

He is summoned to help in Episode 13 and transforms into Batterball Master with encouragement from Sarah, Tony, Pterry and Getalong.

His name follows the normal formation of Shiters names of having it formed from a word + an extra sound, in this case "Bottleneck" ("ネック) and "tsu" ("ツ"). A "Bottleneck" refers to a system where limited potential can be released into something, which is a reference to his ability to release a persons full sports potential.