Bubblegum is a Time Shifter that can shoot bubbles.He is found in Edo-era Japan with Nobunaga Oda.

In an early TV Tokyo poster, Bubblegum was red with a yellow hat and had blue eyes. These colours were swapped for the anime debut, his body became blue, his hat red and his eyes yellow. His Super transformation was also red.

Both the prototype and Bom Bom comics versions of his Bad Transformation have spikes on their turret. This is not present in the anime version and was left off.

Preview of anime design of normal and super transformation

Bubblegum is perky, playful and somewhat childish. He can be trigger happy.In both the anime and manga, he was shown to be battle ready. In the manga, he even fights with Jitterbug and Coconaut, all three of them in Master forms, to fight over simple things like food.

Bubblegum had the ability to shoot bubbles and traps anyone within it. 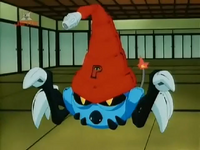 Bubblegum-Con is a hermit crab, his bubbles are much stronger then normal and fires rounds like a machine gun. He cannot use his power if his spark is put out, making water a effective means to fight him. The turrent on his head allows for a full 360 degree range of fire, making getting within range to attack him much harder. 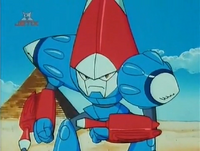 Bubblegum-Master is a humanoid weapon, based on missiles. He is a crack shot and is able to fire precise bullets. He is not as strong as Monk-kon and both he and Eldora between them could not best him, although was able to beat Lynx-kon quite easily.

He is seen in Chapter 1 amongst the group shots of the Time Shifters.

In the manga he is found by Z•Z in chapter 2. Z•Z has taken Bubblegum as his partner (much like how Getalong and Bindi follow Flint Hammerhead and Merlock Holmes). Due to old age, Bubblegum ends up covering for the old man.

He accomplishes Flint in Chapter 3 when they go after Jitterbug.

He also goes with Flint in Chapter 4.

In Chapter 5, he (along with Talen and Bubblegum) are left behind after he and Jitterbug decided to turn into their Super forms to fight over breakfast as punishment.

He joins the group when they go after Batterball in Chapter 6.

He, along with Eldora and Jitterbug were sent to fight Monk-Kon in episode 26. After Jitterbug is sent flying, Eldora and he transform to their Master forms. They hold down Monk and even prevent further harm to Flint, but run out of energy and revert back.

His name follows the typical naming scheme of Word + extra sound, in this case its "Tane" "タネ" and the triphonetic sound ("gan") "ガン" meaning "gun". Note that because of the way the name is structured, unlike the majority of the Shifters, the word comes after the extra sound which normally makes up a Shifters name ("Death-das", "Wolf-en", "Dori-mon", etc). This is due to the name "Tanegan" being a play on "dangan" ("弾丸"/"だんがん"), the Japanese word for "bullet".

His appearance of a bomb is also likely due to "爆弾" (ばくだん) (Which uses the first litter of "Bullet") is the Japanese way of writing "bomb".

Retrieved from "https://flintthetimedetective.fandom.com/wiki/Bubblegum?oldid=8036"
Community content is available under CC-BY-SA unless otherwise noted.