Bugsy resembles a grub or caterpillar with wings, he is mostly blue/green and yellow with pink details. He carries a spyglass in his left hand. He is the smallest Shifter rescued by Flint and overall the second smallest "Monster", first being Ninja.

In early showings, his pink limbs are white, he also had 1 extra stripe on his antennae and his spyglass was coloured differently. This was one of the minor changes to a shifter seen in the anime from concept to final version.

His Monster egg is the smallest, being a small glass-like sphere barely half the size of most other eggs.

Bugsy is not as shy as many of the other Time Shifters, in fact he is highly curious in comparison to most others, being fascinated by bugs and insects.

He can turn anyone into an insect.

Flint as a stag beetle

Dr. Goodman as a fly

Tony Goodman as a Hercules Beetle 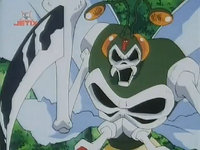 Bugsy-con can turn people into insects like the original Bugsy, but has giant scythes to fight with. On his head is two antennae which can detect any attack from any direction making him very hard to strike. 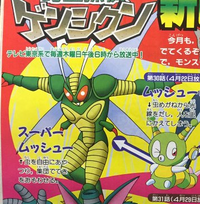 Bugsy's Super transformation was referenced outside of the show and resembles a humanoid insect complete with 4 wings.

Bugsy make his first appearance in episode 30, where he was located in 1830, France and had befriended Jean-Henri Fabre.