Cocoron is a Time Shifter first introduced in Bros. comics vol.2 as Time Shifter no.6. Like Lovelove, is present in all 3 versions of the series. His presence within the series and development as a character does not change much. He is known in the English dub as "Coconaut".

He resembles an egg.

In episode 1, episode 2 and episode 2, early colouring of him with a blue underneath is seen. In Primitive Boy Genshi, his "O" and "X" signs are written on his hands and he holds them up rather then them being on sticks.

Cocoron's Master form went through several changes from early-promos to final appearance. He was conceived originally as a scuba-diver, in the manga he is adjusted to be a pirate and in the final anime version he is changed to a admiral-like appearance.

In contrast, Cocoron's Bad Transformation had only minor adjustments per appearance and remained mostly the same. His appearance in this form is based on members of the Tetraodontidae family of fish.

Coconaut master as featured in the manga

preview of normal and Super form

Tiny, and cute, Cocoron is shown to be brave and courageous despite of it's small size. He has two rods with a "X" and "O" on them, when asked a question he will answer by lifting either one up to indicate a right or wrong answer.

He is noted in the Bom Bom Comics, for his blank expression, this is shown even in the anime as most of the time he holds the same blank expression. When Lovelove attempts to talk to him in Chapter 5, he only says his name leading Lovelove to be confused as to why he was doing this.

Despite this, in the manga he is shown to be as equally competitive as Bubblegum and Jitterbug and once rescued joins their fighting for things like breakfast.

Cocoron has the ability to sense the weather, the movement of the sea, and including the circulation of the wind in the sky. In his normal form, he lacks any kind of physical strength although could out run Bubblegum-kon's bullets.Taking off his hat instantly sends him to sleep. Regardless of what form he takes, his weakness is his hat. If knocked off, he instantly stops moving. In his normal form, knocking it off causes him to go to sleep.

In the manga he can sense when a storm is coming. 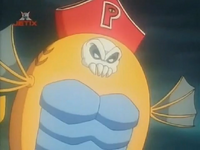 In the anime, he causes lightning to strike Mosbee's ice to break it up and control storms. He also can cause high winds to blow foes away.

In the manga in the water, Cocoron is unstoppable in this form, able to dive under the surface to avoid attacks and to make them. He fires water from his mouth. However, he will become powerless if his hat is removed. 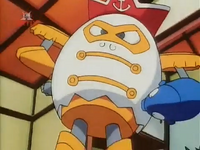 Cocoron Master was shown to be able to fire water out of his arm canon, and is powerful. It is quite slow and lacks agility, as Flint was shown to have to carry him when they are ascending set of stairs while attempting to put out Bubblegum-Kon's flame.

He appears in chapter 5, Kyoichiro encounters him. He becomes the friend of the captain Christopher Columbus. While Kyoichiro is explaining the situation about Vampires with Genshi , T.P. Lady secretly stamps Cocoron and transforms him into his Bad Transformation.

In the battle between the two Time Detectives and himself, he manages to knock Kyoichiro out when he suddenly pops out of the water catching him off guard. Genshi realizes that he is too difficult to fight in the water and forces him out by urinating in the water next to him. Because he previously smashed the ships mast, Cocoron is tied to the ship and his powers are used to make sure Columbus makes it to land. He reverts back to normal when he remembers the way everyone treated him before his transformation.

Back in the future, he now joins in the battle over breakfast, transforming into CocoronMaster to battle Jitterbug and Bubblegum in their super forms.

Cocoron is found by the famous seafarer Christopher Colombus, when he was a boy and trainee sailor. He is served as a compass to him if ever the weather condition is good or bad. Eventually when Christopher made his famous journey to the Americas, Cocoron went with him. After the events of episode 6, he returns with Genshi to the 25th century.

In Episode 31, he was sent to aid Genshi along with fellow Time Shifter Mosbee. He uses his powers to control water to refresh Genshi. Once Genshi is back on his feet, Cocoron, along with Mosbee and his older brother Dipper transform into their Master forms. The 3 defeat Super Ninja and send him flying.

His name follows the typical naming scheme of the Shifters, being a word + an extra sound. In this case, the word is "Coco" in reference to a Coconut, and the triphonetic sound "ron" ("ロン"). Unlike many of the Time Shifters, Cocoron had his name clearly spelt out in English text as "Cocoron" in Book 2 of the Bros. Comics manga.

His meeting of Christopher Columbus is also a play on words as "コロン" ("Corun") can be taken from "コロンブス" the Japanese way of writing "Columbus".