He resembles a skull with horns, feet and legs, he has 4 yellow fangs on his upper jaw. He has 3 yellow claws on his hands and feet. He often carries a scythe with him.

For his bad transformation, he becomes much larger and more sinister. The upper half of hs skull is no longer attached to the rest of his body and he has wings.

He also leaves behind a skull-mark when he stamps someone. A preview of Kyoichiro transformed showed that like the P-stamp the mark was red originally and was changed in the anime. 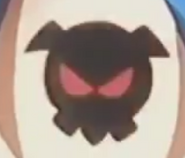 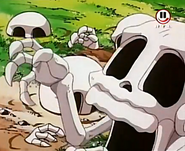 preview of Deathdas and his bad transformation

His servants in their original concept appearance 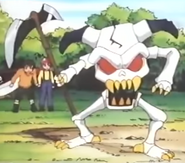 Super Deathdas full design; note that his wings are missing due to an animation error

ditto from behind, this time with wings correctly included

Deathdas is one of the more frightening members of the Great Four, in both appearance and abilities. Deathdas is also cunning and manipulative. His plans and abilities frightened even Petra and her henchmen.

When Deathdas took over Nioja's job, he fell into the role of the boss of T.P. lady and her henchmen, though she still maintained her role of leader while on mission. He claimed the only reason for helping her was that he was ordered to by the Masked Man and was quite content with not helping her on missions. Unlike Nioja, he was not above ordering others to defend him or fight on his behalf. When speaking of the nature of humans in episode 32, he used the selfish desires of the children he placed under his control as an example to demonstrate the true side human nature.

Despite being frighting and powerful, he has a silly side and likes a good laugh at the expense of others and can mistake a serious statement as a mere gag. He enjoys fighting and sees others as being there merely to entertain him. His desire to fight Genshi came from the fact Genshi proved to be quite entertaining for him. He often laughs when amused. In the Japanese dub Deathdas ends most of his sentences with "-das".

However, once transformed into Super Deathdas, Deathdas looses his silly attitude and becomes quite demonic in nature. He has pride as both a member of the Great 4, as well as his own strength and claims to be the most powerful of the Great 4. He has no quips when he used his powers on his "allies" and turned his Beam on T.P. Lady for previously mocking him as "weak".

Deathdas has powers over manipulation. He originally took the form of T.P. Lady's P-Stamp and was the reason for its powers, appearing as a small white cat-like head on the end of the stamp. Once transformed to his natural form, his powers magnified to the point where he could hypnotize entire crowds, then using a beam fired from his mouth, leave his signature skull mark on the victim. His marking ability also extends to physical contact, a mere headbutt can do the same trick.

Though he was primary meant to mark the Shifters, he also marked humans as well. He has the ability to sense "stress" in humans, making particularly stressed humans easy targets. As he explains when accused of controlling Kyoichiro actions, the mark serves to bring out a person's darkest thoughts, their desires, envy, jealousy and pains. Thus, he doesn't actually "control" what a person does directly and instead it acts as a sort of "spell", giving them the feeling of empowerment and the will to do whatever their heart desires - going against even their better nature. 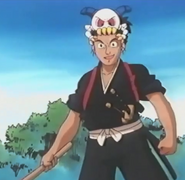 If need be, he can control a person directly via leaping onto their head. In this state, all mental barriers are removed and the Deathdas is in complete control over body and mind, using the victim as though they are a puppet. He can even bring out any hidden powers or abilities they may have and use it to his own whim. As shown in Kyoichiro's case, the victim can still fight back, though remains unable to free themselves until the Deathdas is removed, which instantly breaks his control over them. While Kyoichiro was able to resist Deathdas's hypnotic powers, Miyamoto Musashi did not even resist Deathdas when he took complete control over him. 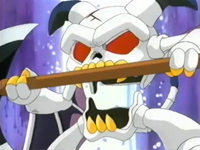 Super Deathdas (スーパーデスダス Sūpā Desudasu, known in the English dub as Uglinator-kon) resembles a horned human skull with human limbs, in the same colors as his normal form and carrying a bigger scythe. He can fire blasts from his eyes that causes foes to become stiff. He can also summon skeleton-like imps that come from the ground and snatch unsuspecting opponents. The skeletons will then attempt to pull their victims underground, burying them alive in the process.

According to the series, Deathdas had actually been with T.P. Lady for some time. However, he did not show himself. He originally attached himself to T.P. Lady's P-stamp and transformed from it to reveal himself. The Deathdas was the source of the P-Stamps powers, and he remained concealed until the Deathdas replaced Nioja in episode 31, when Super Nioja was defeated by the Time Shifters Dipper, Mosbee and Coconaut in their master forms.

Upon unveiling himself, he immediately took control of T.P. Lady's mission to capture the Time Shifters. His first plan after revealing himself was in episode 32 where he and T.P. Lady traveled to 20th century Tokyo and brainwashed a class of students, turning them into black-uniformed drones. After Narugami Kyoichiro vowed to protect Yamato Sora by slowing the Deathdas down, as soon as they meet he places Kyoichiro under his mark. Despite fighting for control, Kyoichiro soon falls under the Deathdas's spell as he is manipulated to despise Genshi. As a consequence, when the Deathdas's army captures Genshi and the others, Kyoichiro is sent into an arena to fight Genshi. When Genshi defeats Kyoichiro and Sora frees him, the Deathdas assumes complete control over Kyoichiro by leaping on his head, bringing out his Vampire heritage. He is once again defeated and Kyoichiro freed.

Next, he tried to capture the Time Shifters Doron, Knuckle, and Shadow but fails to defeat Genshi and his allies. After they reclaim Shadow in episode 35, Deathdas then transformed to his Bad form but is defeated by Genshi, turning back into the P-Stamp and retreating.

Deathdas is later seen in the Land of Dread, where he possessed the Time Shifter Orbit turning her against Genshi. He later reappeared with the rest of the Great Four, when the Masked Man prepares to invade the Land of Time. After the Masked Man's defeat, he and his partners decide to revert to their true forms as roses.

Like the majority of Shifters, his name is constructed of a word + an extra sound. In this case, the word is "Death" and the sound is "das". "Das" is German for "this".

His name is a play on words and is suppose to translate to "I am death" or "this is death".