The Time police issue a small number of standard gadget to their Time Detectives. These are a basic kit for each detective and serve to help them.

The Ridon (the name is a play on "Ride On", also because of the main protagonist is a caveman, it is also made to sound like a dinosaur-like name) is the standard travel means to traverse from the 25th century to any time period and is activated using a Time-Space card. This is a standard device for any Time Detective. Both Flint Hammerhead and Merlock Holmes were shown to have their own Ridon vehicles.

Jillian Grey later reports in episode 38, athe computer systems of the Bureau of Time & Space were infected with a computer virus, preventing all other Ridons apart from Flint's from working during the attack on The Land of Time. 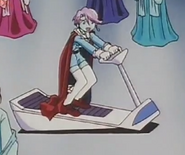 The Ridon from Tony's daydream

Both Flint and Merlock have badges with their details on them that confirm their status as Time Detectives.

The text on the badges cover reads "Bureau of Time & Space Investigations" in early episodes. In later episodes, such as episode 33, it reads "Time Space Detective".

This is one of Petra's most common gadgets. It resembles a "P" and has a cat-head on the end of it. It allows Petra to take control of anyone stamped with it, though aside from Rocky Hammerhead it was only ever used on Time Shifters. The Uglinator was the source of the Stamps original power, he was show to be able to become the stamp again once he was defeated in Episode 36. It was used up until Episode 31, when the Uglinator finally revealed himself.

Seen in Episode 1, Petra owns a fossilizing device which turns any living thing into a fossil. It was used on Flint Hammerhead and Rocky Hammerhead, turning them into a single pineapple-like fossil. Getalong was also hit with it too. Petra also turns a Pterodactyl into a fossil with it. These fossils can be revived in the future.

It was also shown in episode 12 when Petra attempted to use it on Bindi, however due to his interference, she got Flint instead.

She also had it out in episode 34, though never used it or even prepared it for usage at all.

The Lady Mecha is her primary mode of transport. It resembles a cat head, sticking with her "cat" theme. It can morph into a mecha, hence its name. It was shown with a number of weapons, including missiles, a buzz-saw, a laser canon and several mecha that looked like athletes. Like the Time Detective Ridon, it too can read Time Cards.

It has a distress signal which when activated, which call for help, though Petra only uses it once in a emergency after being lost in the timeline for an entire week.

It was noted in episode 18, that due to her constant loosing streak, their repair man skimped on repairs.

Seen only in episode 14. This is a small copy of the Lady Mecha. It was programmed to attack and nab any Shifter when the bag was opened. Unfortunately, Dino neglected to leave the bag behind when they ran from Dr. Bernard Goodman's lab and he ends up bringing it along with them after they flee. The consequences is, Dino opens the bag and the mini-mecha attacks them.

Later it is seen flying through the air towards Merlock Holmes, who dodges it, only to be hit by Petra and her henchmen instead.

This was a gift from the Dark Lord to Petra and allowed her to find any Shifter. In early episodes in particular, this was useful and Petra was able to get several Shifters before Flint even arrived to rescue them. In Episode 18, it also helped her locate Bindi, who had run away from Merlock Holmes.

The Time-Space card is a small golden-coloured card which is inserted into the Ridon. This allows the Ridon to go to a specific destination in Time and Space and stores the co-ordinates that allows travel to and fro that place. It is issued whenever a Time Detective is placed on a mission.

Space-Time criminals, such as Petra, also use Time Cards. As shown in episode 24 and episode 37, without a Time Card to give co-ordinates it is very easy to get lost in the timeline.

This badge allows a Time Traveler to understand the language of any native land they arrive at, as well as be understood by the people they met in that place. As Dr. Bernard Goodman explained cultural barriers still exist that could cause issues with communications.

Sarah Goodman and Tony Goodman are seen to wear these and are the only ones seen wearing one at all. The badges, are also the twins most common art error as in several instances they are left off completely. Flint is giving one, but it is not seen on his character design. Other then these 3, it is presumed most of the cast wears one, but like Flint, theirs is not visible.