He resembles a watering can with an elephant features.

His resemblance to his brother Mosbee is more apparent in both their kon and master forms as both share a lot more resemblance in these forms.

all 3 forms from a magazine showing concepts

Dipper was shown to be a encouraging Time Shfiter, who did not want to see Marco Polo give up when they were lost in the desert, supporting him even after he gained the trust and authourity in a town. Even when he knew Marco Polo's tall tales were lies, Dipper also did not stop Marco Polo from telling them despite expressing facially discontent.

He is also the older brother of Mosbee. The two celebrated their reunion and were usually seen together often in group shots with other Shifters, usually with Mosbee on Dipper's head after their reunion.

Dipper has the ability to find water and can even create water from his nose. 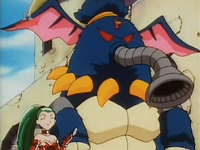 His water abilities are replaced with fire which fires from his nose. 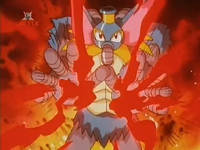 Like his con form, his water abilities are replaced with fire which are fired from his hands.

According to the story as told by Marco Polo in episode 31, Dipper was originally found by Marco Polo when he was being sold at a market, Marco Polo rescued him. Dipper stayed by Marco Polo's side and accomplied him on his journey with his father and uncle.

On his journey, Marco Polo faced countless events that made him feel useless and a burden to his father and uncle. Eventually, Marco Polo ran off, taking Dipper with him. Just as Marco Polo was about to give up, Dipper gave him the strength to carry on. At some point soon after he ran away, he managed to gain the respect of a town, whom came to rely on Marco Polo due to Dipper's powers, but did not enjoy being ordered around by a brat.

When Flint Hammerhead arrived, Marco Polo and Dipper saved them from being killed after they soiled a well owned by a man and his men. They took Flint back to the town where Marco Polo was staying and they stayed overnight as Marco Polo's guests. During the night, Petra Fina Dagmar, Dino, Mite and Ninja tricked Marco Polo into believing Flint and his friends where thieves and monsters, so Marco Polo imprisoned them the next day. While he was distracted, Dipper was caught and Petra stamped, turning him evil.

After a failed attempt to rescue the group from Merlock Holmes, Marco Polo became the only one left to rescue everyone. He managed to help free the others while Dipper-Kon and Super Ninja were beating Flint in an arena. Marco Polo then manages to get through to Dipper, freeing him from Petra's control. Then, Dipper, along with his little brother Mosbee and their fellow Time Shifter Coconaut transformed into the Master forms and proceeded to defeat Super Ninja. After the battle, Dipper and Mosbee celebrated their reunion.

After Marco Polo was united with his father and uncle, Dipper was returned to the 25th century to join the other Time Shifters.

His Japanese name comes from "jabber" (ジャバー), or "talk in a rapid, excited, and often incomprehensible way".