Her appearance is likely loosely based on Quetzalcoatl.

Eldora is seems to be shy, like many other shifters.

She can turn anything into gold, though this is not permanent and they will change back once Eldora cancels out the transformation. She also has the ability to create a shiny beam that blinds anyone (in the English dub, this is mistranslated to stopping time). 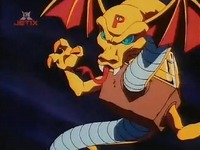 Eldora was beaten by Flint, and finally submitted after being hit once by Getalong's love beam. 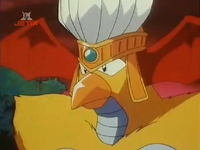 Eldora is able to form a beam of light to attack with. She is strong and agile, though easily beat by Monk-Kon despite having the aid of Bubblegum- Master. She also lost to Super Ninja.

Eldora appears in episode 3, in the 16th Century, South America in the Aztec empire. She is freed from Petra's influence by Flint.

She also appears in episode 12, where her reflection powers were used to free Flint after Petra fossilizes him again.

He, along with Bubblegum and Jitterbug were sent to fight Monk-Kon in episode 26. After Jitterbug is sent flying, Eldora and he transform to their Master forms. They hold down Monk and even prevent further harm to Flint, but run out of energy and revert back.

Eldora is summoned again in episode 29, she makes an the entire city into gold to lure out Flint, who is under Change's power. When Eldora transformed into her master form to aid Flint against Change-Kon, Ninja steps in the way and fights her instead.

Her name "Eldora" is a reference to the city of El Dorado. Though it does not fit in with the normal naming scheme of the majority of Shifters, it has a similar style to how it is form. The ending "ra" a common sound to signal a female character as exampled by Yamato Sora and Putera and is why she is originally female.

Retrieved from "https://flintthetimedetective.fandom.com/wiki/Eldora?oldid=8219"
Community content is available under CC-BY-SA unless otherwise noted.