Early promo art shows he was originally brown in colour and looked more different even in his regular form. His concept appearance is seen in episode 1 (Japanese dub only), episode 2 (Japanese dub only) and episode 23. However, magazines showed his design more closer to the animes final appearance. This means the design changed after the first few episodes were put into production.

Elekin's early concept as seen in the anime

He is easily excitable and is the most ecstatic of the Shfiters shown and when happy lefts his feet up and down.

Generates electricity after his crank in turned. Can attack with electric shocks. 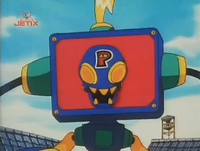 The plugs at the end of his arms generate electricity. 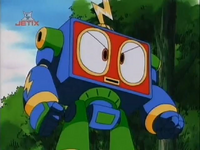 He shoots lightning. This form lost to Raldo-Kon.

His name comes from the "Elekiter" ("エレキテル") of which he is based upon.