A preview of his 3 forms showed originally he was designed to be purple and blue.

The anime also has slightly different colours for the Super form as to the Hyper Sticker Collection.

all 3 forms in preview version

Elfin enjoys handing out toys and cheering people up and is empathetic of others. 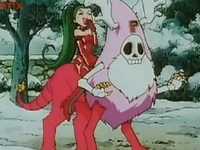 He can manipulate the scenery and turn anything into a theme park ride, these rides can come to life to do his bidding and move around as though they were alive. 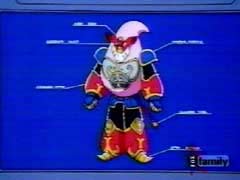 Elfin-Master does not make an actually appearance in the series. However, a hypothetical version of what Elfin-Master is thought to look like is shown on Dr. Goodman's computer.

According to the initial preview, it has a beam that is able to create a number of toys.

Elfin first appears in episode 13 when he is giving out presents to children. He becomes connected with Maria due to the circumstances surrounding the disappearance of her mother. He tries to cheer her up while Flint and his friends investigate the events that occurred a year years previous. While Flint is gone, Elfin is taken by Petra's henchmen Dino and Mite and he is stamped with the Petra Stamp. He is transformed and Flint is lead on a chase around. Elfin combats Flint by changing the the landscape into fair ground rides, which attack Flint and his friends. With help of Batterball Master and Maria, Elfin is eventually defeated and returns to normal. He then returns to the 25th century with flint and his friends.