Funga (フンガー) was a manga exclusive character who appeared in the Bros. comics, where he was introduced as Time Shifter no.5.

He is large and carries a large planter on his back.

Despite his fierce look, Funga is a coward. He coughed up the entirety of his captives after a scary story told by Tony Goodman and was frightened by a single glare from Hanasaka. 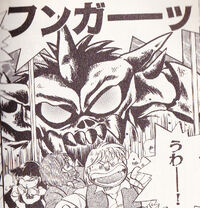 He looses his planter that he carries and becomes a large monstrous demon-esque creature.