Gerais a mastermind, who likes to toy with others. When finally facing off against Genshi, he goes into a daydream about this finally being his time to shine. These emotions, often according to him as conflicting to each other (experiencing great joy yet also experiencing great sorrow at the same time). Like the others, he is a proud member of the Great 4.

Like the other 4 members of the Great 4, he has a particular way of talking, and often says "Gera" at the end of his sentences.

Gera uses a computer to control the tunnels and passageways within The Land of Dread, creating traps for people entering the Land of Dread. He can also create mushrooms which can take various forms in a bid to deter anyone entering from fighting. He can fire mushrooms as a weapon. 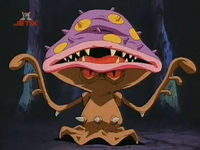 Super Gera has the power to fire mushrooms, which the victim is forced to eat if they cannot block them. Upon consumption, various effects such as laughing uncontrollable can occur, the mushrooms can also force a transformation.

Gera first appears after Nascal is defeated in episode 36, now tasked with stopping Genshi and the others with him at the time.

He set up traps for Genshi which Genshi faces in episode 37, from quakes to replicas of his friends. Eventually Genshi beats all his traps and, after rescuing T.P. Lady, faces Gera himself. After weakening Gera to the point of submission, he then goes after Petra, but Dyna and Mite stop him. After swallow a large amount of his mushrooms to protect T.P. Lady, they transform into their natural forms. Gera uses them as his underlings and sends them after T.P. Lady. He is defeated and sent falling into a ravine.

He rejoins the other Great 4 to attack The Land of Time. In Episode 39, Genshi frees the Time Shifters, in light of the feelings the 4 feel, Gera decides with the others to revert to their original forms of roses.

Like most Time Shifters, his name is taken from a word + an extra sound. His name is constructed of the Japanese expression "Ge", which means "express revulsion" (English equivalent of "Ge" is "ew" or "ick") and "ra". Gera is the only character whose name ends with "ra" and is not female as "ra" normally signals a female.

His reason for laughing "GeraGera" is because "Geragera" ("ゲラゲラ") is Japanese for "guffaw", which means "extremely loud, heartily laughing".