Petra (T.P. Lady) and her Henchman arrive in prehistoric times intent on getting the Time Shifter (Time-Space Monster) Getalong (Love-Love). Upon arriving, Petra jumps ahead and gets caught by a Pterodactyl who attempts to her, which goes badly for the creature and she fossilizes it. Adfter it falls to the ground, Flint and his father are seen riding a Triceratops while hunting another, when Rocky attempts to make theirs go faster both fall off. They chase it down by foot, and Getalong appears and makes them all friends with its Love beam.

Petra interrupts and tells them to stop being so nice and that she wants Gatelong. Flint and Rocky interfere. After her defeat, she gets angry and fossilizes Getalong. As a volcano erupts, fearing her own safety she fossilizes the two caveman into one fossil and flees to the 25th century with the intent of digging her up later.

In the 25th century, disguised as teach "Ms. Iknow", she has her class dig for the fossils. When Sarah Goodman (Sora) finds the Flint/Rocky fossil, which talks and moves by itself. Her twin brother Tony (Tokio)also discovers Getalong's fossil. They hurry them back home without telling their teacher, but on the way out, Dino spots the pair and notices Tony carrying Getalong.

Sarah and Tony take the pair back home and ask their uncle Dr. Bernard Goodman to help. He manages to fossilize the pair of fossils and even update their language to modern tongue, but Flint's father did not have enough data left in the fossil to return him to normal and is left as a slap of rock, which the Dr. turns into Flint's axe. Flint is upset by this turn of events and cries until his father comforts him. The axe also has a fossil beam on it, which makes use of the energy of Flint's father proceeding to turn the Dr. into a fossil and then back again, leading to the Dr. telling them to not use humans as test subjects.

Tony asks about Getalong and the Dr. explains that it is likely a Time Shifter, a monster that has the ability to move in time and space and is to do with the sudden increased time-space crime rate.

Petra interferes in an attempt to retrieve Getalong, but is beaten by Flint and Rocky. After the defeat of Ptera, Old Timer contacts the Time Bureau and asks Flint be instated as a Time Detective. 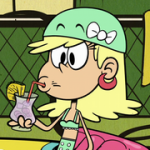