HaniWani はにワニ is a manga exclusive Shifter and Jitterbug's prototype. He is introduced as Time Shifter no.1.

HaniWani has a habit of randomly chewing just about anything from clothes to trying to chew people.

HaniWani can eat through rock. 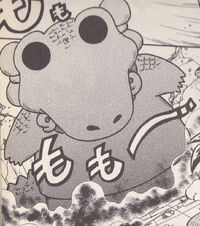 HaniWani becomes an enormous version of himself. He can crush anything under his weight via his huge stomp attack.

His name is a portmanteau of haniwa (埴輪), terracotta figures used in Japanese funerals during the Kofun period (3rd-6th century AD), and "Wani" meaning "crocodile" or "Alligator".