Jitterbug first appeared in the bom bom comics and then the later anime. He is loosely based on the character "HaniWani" from the Primitive Boy Genshi comics.

Jitterbug's Bad transformation, was different in early promos. The appearance is different even compared to both the anime and manga.

In the manga, Jitterbug has a small sword made of pottery attached to his left hip.

Jitterbug is seen as happy and enjoys causing people to dance uncontrollably; whether or not they like this themselves. He was a little cowardly at times, however, the equally cowardly Talen and he both overcome their cowardice in later episodes. When fighting Monk-Kon, he was left upset when he did nothing to help at all.

In comparison to the manga, Jitterbug was not as cowardly as the anime portrayal, being quite brave despite being fragile. He even took on Bubblegum to bicker over food in his Master form.

Like most Time Shifters, Jitterbug has the ability to travel through Time and Space. He has the power to make people dance and manipulate them, though most caught under his spell don't enjoy this (his fellow Time Shifters included) except for Flint. However, he has a frail body made of clay that is easily broken. Changing forms, can completely heal him.

His powers were shown to be useless against Monk-Kon.

In the manga, it was shown that while broken into lots of pieces, he could see, hear and communicate still despite his broken state. He automatically heals himself if someone puts the pieces of his body together correctly. 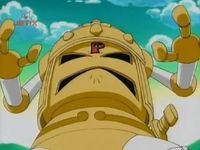 Jitterbug-Con (ハニワル Haniwaru) resembles a floating clay figure who can eat earthenware and shoot them out of his mouth. In the Bom bom comics, he fires missiles.

The "Eating" part is likely a nod to HaniWani. 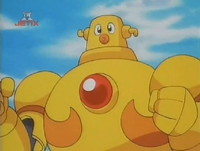 Jitterbug-Master (スーパーハニハニ Sūpā Hanihani) is a giant, humanoid version of Jitterbug. His "Power Whirl" attack has him spinning himself like a tornado towards his opponent. The gem on his chest fires a beam that makes others dance uncontrollably.

In the manga, instead of Jitterbug's norml fragile body, he gains a metal body, resembling a sort of steam-punk style robot.

He is seen falling out of the Old Timer's home in Chapter 1. Jitterbug is first is mentioned in Chapter 2.

He appears again in Chapter 3, when Flint rescues him.

He joins the group in Chapter 4 when they go after Talen.

In chapter 5 he, Bubblegum and Talen are left behind when Flint goes after Coconaut due to the fact that he and Bubblegum decided to fight in Super forms over breakfast.

Jitterbug was Flint's first rescued Shifter after becoming a Time Detective, and was rescued in Episode 2. Jiterbug was originally found in 2nd century Yamataikoku, where Petra had used his powers of manipulation to control the people and imprisoned the local populace. While trying to get him away from Petra, he smashed on the ground. Petra transformed him into Jitterbug-kon, which fixed him instantly but made him evil. During the fight with Flint, Jitterbug remembered Flint's feelings for him after being smashed and changed back to normal. He accompanied Flint back to the 25th century.

In episode 22, he and the other Shifters go looking for Rocky Hammerhead after he goes missing. When Petra's henchmen Dino and mite show up, everyone is captured besides him and Talen. The pair transform into their master forms and eventually after Rocky is freed from Petra's control, Petra is beaten.

He was sent to fight Monk-kon along with Bubblegum and Eldora in episode 26. However, after he tries to make Monk dance, Monk sends him flying. Later, a beaten Jitterbug returns to fight again, but to his dismay he missed the entire reminder of the fight and no one seemed bothered by his disappearance.

His name is one of the Shifters that does not fit with the normal naming scheme of the Japanese version (word + extra sound). His name comes from haniwa (埴輪), terracotta figures used in Japanese funerals during the Kofun period (3rd-6th century AD).

Retrieved from "https://flintthetimedetective.fandom.com/wiki/Jitterbug?oldid=8195"
Community content is available under CC-BY-SA unless otherwise noted.