He resembles a small golden/yellow dragon in red Chinese-style attire.

His Bad transformation had quite a lot of change between the first preview and final form within the anime. Originally he was a golden colour, which was changed to silver, he also had 8 arms/legs which became only 2. The spines on his bac were lengthened and his eyes went from green to red, his horns changed shape slightly and he was given armlets. Overall, despite the tweaks to the design, the final version bore much similarities to his prototype that appeared in magazine form.

His Super transformation, was never seen within the show but ha 4 arms and was a humanoid dragon with nun-chucks. His outfit, seems loosely inspired by Bruce Lee's outfit from films such as "Enter the Dragon", Knucle himself is overall a reference to Bruce Lee and his later works. 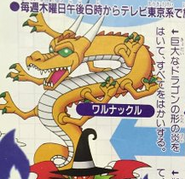 Knuckle will lend his powers to defend anyone and lives by a form of code of honour. Knuckle is also a teacher, who is willing to train others to fight but he is not above dealing out punishment for his students disappointing him. He is supportive of others above all else.

Knuckle is a master martial artist, knowing his own form of style called "Knuckle Kenpo". The style can be taught to others via Knuckle's training methods. However, the most devastating move of this Kenpo, is achievable only by the fighter fighting with all of their heart.

Knuckle is the only Shifter whose specific powers can be learnt by someone else without him having to transfer any power to his subject. All other Shifters such as Muscles, Artie or Batterball have to use their powers directly on a person to transfer their abilities to that person. 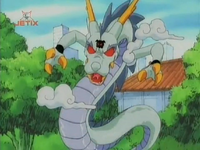 In this form, Knuckle's Kenpo moves are much more stronger, his tail also has a pair of blades on the end of which he can fight with.

Its super transformation was shown outside the show and is known to have been a dragon-like humanoid with 4 arms. He holds two sets of nun-chucks one in each of his lower arms.

Knuckle is first seen in episode 33. Before Flint and the others arrive, Knuckle lands in Hon Kong back in the 1970s and finds a Drama School boy named Lee caught up in a ruckus involving several senior film extras. After Knuckle saves Lee's life, Lee takes Knuckle as his master. Knuckle teaches Lee "Knuckle Kenpo", but Lee struggles to cope with Drama school since he does not put his heart into his acting. Eventually, Lee planned to take on a martial arts tournament in Hong Kong with the aim to win it and become famous as a martial artist.

Flint arrives just as Lee quits his first movie, having disapproved of the director's discrediting of Lee's acting. Knuckle tries to get through to Lee, but fails. When Lee enters the tournament, he makes ti through to the finals, but looses to Flint. When Lee charges out of the arena and Knuckle follows him. Outside, he spots what he thinks is Lee, but it was the Uglinator and Knuckle is stamped by him. Petra immediately causes Knuckle to transform into Knuckle-kon. Knuckle-Kon bursts into the arena and easily beats all the other competitors, then sends Flint flying out of the building.

Outside, Musey arrives and transforms into Musey Master, but is promptly beaten. Flint tries to fight but Knuckle-kon continues to best him. Finally, Lee tries to reach out to him and manages to pull off Knuckle's most powerful move, leading to Knuckle's defeat. Having finally realized Lee understood Knuckle's teaching, he reverts back to normal. They then defeat Uglinator's Robot 12 and send the back guys flying. Knuckle departs from Lee and returns with Flint to the 25th century.

His name means "Knuckles" in Japanese.