Leafy is a Time Shifter who is first seen in the Bom bom comics but does not have a part in the storyline. He is likely the finished version of another Time Shifter from the original manga called Hanasaka due to their same powers.

Leafy is a peaceful Shifter who normally is gentle by nature.

Leafy in her concept preview

Leafy has the ability to create flowers. 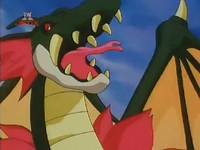 Leafy-Con resembles a dragon and breathes fire. His skin was also as hard as diamonds and could not be broken by Rocky Hammerhead. This form has the strength to easily beat Raldo Master. 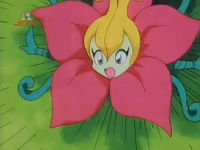 Leafy Master can spray pollen. This pollen brings on a strong Hay fever allergy which renders a foe incapable of fighting due to a runny nose and feeling of tiredness.

In episode 30, Leafy was sent to help Flint while he dealt with Bugsy-kon. Leafy transformed into Leafy Master and managed to make Ninja stop fighting, leaving Bugsy-Kon to be fought with alone by Flint with no interference.