In the only instance his Super form was seen in the show, he has a red mane instead of the more blond main seen in early preview and concept art.

Lynx in the manga 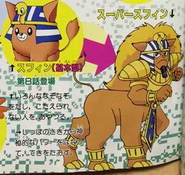 preview of normal and Super transformation

His body is split between two entities, the first is the main body which looks like a small dog/cat and the second is the golden band entity on his head, which acts as the voice of Lynx himself. Though mostly calm, Lynx is shown a little more sinister then the other Time Shifters, since unless others' guess his riddles correctly, they are bound to meet a dire fate. Otherwise, he appears as friendly and happy as other Shifters.

Lynx is a master of riddles, his riddles have the power to alter the fate of events, this fate a person faces depends on if the answer of his riddle is answered correctly or incorrectly. The figure on his headpiece acts as the question teller. If a person answers a question correctly, Lynx is defeated and nothing happens. If the riddle cannot be solved, then a bad event will occur to the person(s) answering. When first shown, the punishment for answering incorrectly was for the individual to be bound with a headband and forced to obey whatever Petra commanded of them, though it is later shown Lynx is capable of other mishaps.

In this form, Lynx resembles a sarcophagus. When both halves split, they can imprison a target and mummify them. He is also capable of firing sonic blasts from the cobra on his headdress. 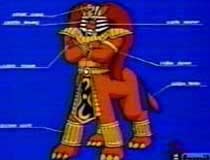 Lynx is never shown transforming into it, but Dr. Bernard Goodman comes up with a design idea of what he will look like based on his research into the shifters. No details are known about this form.

His name in Japanese follows the typical naming scheme of a worde + extra sound, in this case "Sphinx" (Written as "スフィンクス" in Japanese) and the sound "ン".

Both his Japanese and English names are a nod to the Sphinx , of which his design is based upon.