He is based on the Moai found on Easter Island.

Moah is by far the biggest Time Shifter and his Kbad and super transformations are huge in comparison to every other Shifter. In its only non-title screen appearance, his monster egg was shown to be far larger then all other Time Shifter Monster eggs.

There is suppose to be a small collection of rocks on his left hand side next to his feet, these float in the air a few inches above the ground. However, aside from his eye-catcher, the cluster of stones only appear in episode 22 and episode 39. All other instances that he appears in, they are left off.

His prototype model for the show is shown in the Hyper Sticker Collection, not much changed overall except for the models proportions. Odd details were changed such as toes (which were removed in the anime version), as well as the number of rocks that float by his feet.

Moah is a gentle giant.

It was shown that although he loves to play and join in with games, due to his size games like "hide and seeks" or "jump rope" he can't join in on.

When Rocky Hammerhead went missing in episode 22, he was shown to be interested in statues around the city. He also noticed, but did not report, Rocky's disappearance. At the end of the series The Cardians, Monk and he were the 3 who stood ready to battle the Dark Lord when he tried to get into the Land of Time's clock, demonstrating that he is among the Shifters most ready to step up to a challenge.

He is regarded as "the soldier of the earth" and most of his powers are to do with rocks and the earth, even in both his bad and super transformations. He is quite strong and powerful even without transforming. 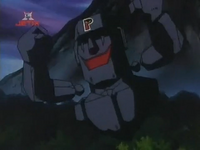 In his -kon form, his head is a volcano which can spit ballistic debris at foes. If a part of him is broken, he can reform that broken piece. The rocks that make up his body can also be used to attack with individually, so breaking part of him such as his arm can make things worst, even if he does not immediately reform the arm.

Due to its size and strength, Moah-kon was able to easily break Getalong's love powers. 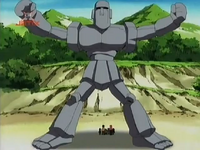 In his master form he can summon Easter Island Heads.

Like the majority of Shifter, his name is formed of a word with an extra sound. "Moaiwa" refers to the "Moai" of which he is based on, and the extra sound is "wa".