Monarisu is a Shifter who first appeared in the Bros comics as Time Shifter no.2., in the English dub she is called "Plumella".

Monarisu was one of the few Shifters to transfer over from vol.1 of the Bros. comics in her concepts essence, though her appearance was overhauled. 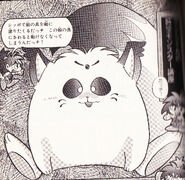 Monarisu mainly enjoys painting. She displays natural enjoyment of this, even under the control of the P-stamp, making Monarisu one of the few shifters to go against T.P. Lady's will while under her control.

Monarisu seems to have the ability to create beautiful works of art using her tail. She can turn people into paintings. Her abilities are the opposite to Artie's own art based abilities, which are focused on 3D pieces, not 2D. Also similarly to Artie's ability to bring out the hidden talents of a person, she can ignite the kindle spirits of those with artistic skills, though this is done indirectly though her own art. 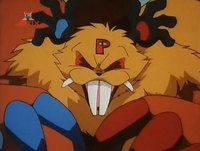 Aside from its size and strength, it can fire paint from its hand-like ears. The paintballs it fires are large and sticky. 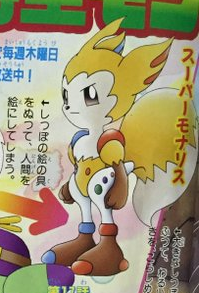 This Shifters super transformation was referenced outside of the show and is known to resemble a humanoid squirrel.

The name is a play on words as "Mona" comes from Mona Lisa. In Japanese, the sounds "L" and "R" are interchangeable, meaning "Lisa" can be pronounced "Risa". "Risu" means "squirrel" in Japanese, in other words, her name is constructed by simply changing the vowel sound at the end of "Lisa" from "ザ" ("za") to "ス" ("su").