Monk (ボウザン) is a Time Shifters and the final version of the concept for a monster known as Hyururu.

His Bad Transformation received slight tweaks in the anime. Originally he had a red spike on his helmet and his shoulder pads were slightly different. Also the weapons were changed, though not always greatly.

Monk enjoys fighting and was shown to go offensive as soon as Flint told him he was coming with him. He does not back down at all and can be aggressive. However, the Old Timer blamed this behavior on Benkai, as he noted that Monk was not typically that aggressive and violent and such behavior was problematic.

He was shown to have calmed down after being brought back to the 25th century.

At the end of the series The Cardians, Moah and he were the 3 who stood ready to battle the Dark Lord when he tried to get into the Land of Time's clock, demonstrating that he is among the Shifters most ready to step up to a challenge.

Monk has the ability to know how to use any weapon. He can make weapons smaller to make them easier to carry. 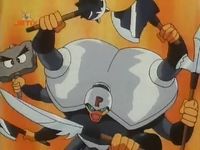 In addition to his ability to use any weapon, he has multple arms allowing him to wield many weapons at once. Monk-kon was physically strong enough to withstand the combined strength of Eldora and Bubblegum master and he was also unaffected by Jitterbug's dancing abilities. However, he is very dependent on his weapons, thus disarming him is the only way to defeat him.

Monk appeared in episode 26 and was originally with Musashibō Benkei. When Benkai goes off to find food just before trying to obtain his 1000th Meito. While he is gone, Petra shows up and Monk is Stamped. After changing into Monk-Kon and stealing Rocky Hammerhead from Flint, Pterry calls for back up. 3 shifters are sent to aid Flint. After tossing away Jitterbug, Monk fights Eldora and Bubblegum master. During their fight, they run out of energy and change back. Flint defeats Monk despite having no wepaons using the "fighting spirit". As the memory eraser is activated by Pterry, Benkai returns with food. Forgetting he ever met Monk, he goes off to get his 1000th Meito from Minamoto no Yoshitsune.

Back in the 25th century, Rocky gives a lecture on the Fighting Spirit, but Monk is the only one paying attention.