He is based on a mossball, of which his name of "Mosbee" originates from. He has elephant features.

In his bad transformation, he resembles more closely a woolly mammoth, of which he is based on.

His Master form is based on a humanoid woolly mammoth. His trunk becomes a horn in this form leaving him with no mouth.

He was easily misled by Petra when they first met into believing Flint was there to kidnap him, displaying a level of naivety. He is otherwise courageous and brave.

Mosbee is the younger brother of fellow Time Shifter Dipper. The pair were often seen together after their reunion in group shots of the Time Shifters.

Shoots a powerful beam which can freeze anything. He proved to be one of the more useful Shifters due to his powers overall usefulness, thus was summoned to aid Flint more then most other Shifters within the series. 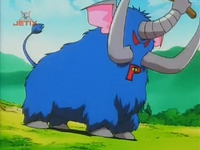 Mosbee-kon carries a large club in his trunk, which he can attack with. 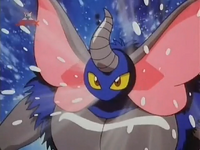 As Mosbee master, Mosbee fires a blizzard like beam, which freezes a wide area much faster then normal.

In Episode 6 he is sent to aid Flint against Coconaut-kon.

In episode 17, when Tony says his head needs cooling down, Mosbee fires his ice beam at him.

He is sent to help in episode 19 after Moah sets off a volcano.

In episode 31, Mosbee aided Flint and the others in defeating his brother Dipper. Then, along with fellow Time Shifter Coconaut, the 3 transformed into their master forms. They proceeded to defeat Super Ninja. After the fight, Dipper and Mosbee celebrated their reunion together.

His name follows the typical naming Scheme of the Shifters, being a word plus an extra sound. In this case Mosu ("モス") + Bii ("ビー"). "Mosu" means "moss" and is likely a reference to his appearance, as he resembles a mossball with elephant features sticking out of it. His name could also be a play on words because "ビー" may come from the Japanese word for "beam" ("ビーム)". His name literally means "Moss Beam".

His appearance in the anime in Russia, could also be a reference to "モスクワ", the Japanese way of writing the city name of "Moscow".