His overall appearance is based upon a Shot put ball.

Early previewed designs show he originally had a horn on his head. The colour of all 3 forms changed between versions. The face of the Bad transformation was also changed.

Muscles in the manga

Muscles was noted for his stubbornness to completely surrender, even when clearly defeated. In almost all other cases, the Petra stamp or Skull stamp was removed before a Shifter reverted back to normal. In Muscles' case, even after he met defeat as Muscles-kon and reverted back, Muscles did not loose the stamp for some hours because of his stubborn refusal to surrender.

He enjoys exercising and running. When he turned Sarah into a giant, he appears in her cleavage area, showing he also has a hint of perverseness - though this is the only example of him doing this.

Muscles has the ability to make anyone he touches super-strong. This can be either by increasing their muscle mass or their size. Those effected by the power can even become stronger then Muscle himself, even when he is transformed.

Getalong's love beam was also shown to be able to reverse the effects of Muscles powers and revert someone back to normal. 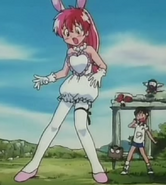 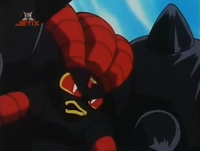 Muscle con was physically strong, though was beaten in strength by Sarah Goodman, whom he had made into a giant moments earlier. His spikes are also missiles which can launch at a foe. He can also trap a foe in springs (the type used by numerous exercising equipment). These require strength to remove. 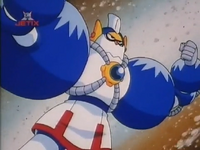 Muscle Master is a physically strong fighter, who relies on brute force to achieve its means. Its strength, however, was matched by Super Ninja of the Great 4.

Like most Shifters, his name is formed of a word "Musu" (from the Japanese way of pronounuing "Muscle") and the triphone "Run". His Japanese name is likely a phonetic play on words, "Masurun" sounds similar to "Muscle Run".