Musey does not like being captured and was shown to hide in the face of danger.

Musey has the ability to create music that can influence people's feelings. In one instance, he causes everyone to cry with joy as his music made them remember their happiest memories. 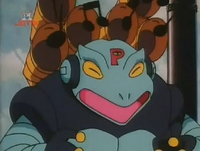 As Musey-Con, he is able to pummel his enemies with musical notes from the horns on his back. 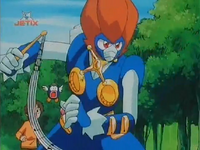 Musey as Musey master can create a lasso made of music staffs + ledgers with notes on. He can also fire beams from his chest. This form was easily beaten by Knuckle-kon.

Musey first appears in episode 28. He had become a theater mascot that Wolfgang Amadeus Mozart and Ludwig van Beethoven worked at. He befriended Beethoven.

Musey was sent to help Flint against Knuckle-kon in episode 33, but was easily defeated by the other Shifter.

Normally Myuujii ("ミュージ") is Japanese for "Musical", though the extra "ー" after the "ミュージ" (making "ミュージー") changes the way "ジ" would be pronounced in Japanese. It is likely a reference to "ジーニアス", the Japanese way of writing the word for "Genius", making his name mean "Musical Genius".

The English name is a play on a "Muse".