Nasca (ナスカル) is a time shifter from The Land of Dread.

Nascal is full of himself and as proud as any other member of the Great four. He enjoyed taunting and mocking others.

Like other members of the Great four, he has a particular manner of speech and often says "ka-ka-ka-ka" in the Japanese dub.

Nascal has the ability to pop in and out of sight by teleporting. 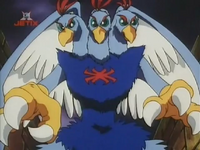 Nascal-Con as a giant, three-headed condor monster. His ability to teleport becomes a reflex action, allowing him to fight using the ability to strike without warning and equally dodge blows with ease. This shocked Nascal when Flint managed to guess where he teleported at one stage in their fight.

Nascal is the gatekeeper of the Land of Dread and was tasked with the job of stopping Flint entering the Land of dread in episode 36. He fails to stop Flint even after transforming. Defeated, Nascal transforms into the key to the Land of Dread, letting Flint past and failing his mission to stop him.

He next returns to help the Dark Lord with the other members of the Great 4. After Flint reverts the Time Shifters back to normal, Nascal and the other Great 4 are affected by the powers of Getalong. All 4 agree to revert back to their normal forms of roses.

Like most Shifters, in the Japanese dub his name is made up of a word + 1 extra sound. In this case the word is "Nazca" + "ru".

Retrieved from "https://flintthetimedetective.fandom.com/wiki/Nascal?oldid=8208"
Community content is available under CC-BY-SA unless otherwise noted.