Nioja's normal form is the smallest of all the "monsters" as it is only a few inches big. It resembles a badge.

In his super Nioja form, he resembles the Nio, of which he is based on.

His mouth remains mostly closed throughout his appearances even when talking. Episode 31 is a episode which gives an example of the rare times Nioja's mouth moves as he talks.

His early concept that was shown in a magazine shows that originally his face-paints were more detailed and most of his adornments were completely gold. Some minor tweaks included his staff not being part of his necklace and the colours of his jewels on his necklace switching colours. Originally the main medallion was green and the outer ones red, in the anime the main one was red and the outer ones green.

Nioja as shown in magazine unveiling

Nioja spent most of his on screen time in his Super form, rarely reverting to his pin form except off missions. He displayed a warriors pride. He stated he did not take orders from T.P. Lady, but was not above giving her orders instead. Unless the foe was considered worthy, he also did not fight, refusing to fight at times when he saw it as no challenge. When he did stand up for a fight, he would prefer to take the challenge unaided and often claimed Genshi as his foe, often preventing Shifters under the power of the P-Stamp from fighting Genshi.

Also, he has a particular way of speaking. He uses "拙者" (translation; "myself") when talking and ends his sentences with "ニョ" (translation; "Nyo"). In particular the use of "myself" is odd to the Japanese as a typical speaker does not use first person to refer to themselves, favouring a third person perspective (as oppose to a English speaker who would refer to themselves normally in 1st person, not 3rd person). He shares this trait with Ammon's Japanese dub version.

In his original form, Nioja is nothing more then a pin attached to T.P. Lady's dress. If T.P. Lady could not find a way to acquire a Shifter, Super Nioja could be called on to do so. He also served to back up any that she had already captured and stop Genshi from interfering.

He also appears to be the weakest "Monster" in his base form, having no apparent powers at all. 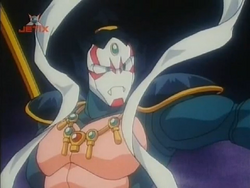 Nioja can transform like the other Great 4 into "Super Nioja". Super Nioja was a strong fighter and fights with a golden staff, which is created by pulled a bar off his necklace, which becomes the staff. He can match Muscles-Master in strength and his head is harder then diamonds. Other shifters such as Eldora-master lost quite easily.

When serious, he can increase his muscle mass, the markings on his face also change to be more sinister. He often called out random phrases, which were his attack techniques.

He states he doesn't fear bugs in episode 30, but in the episode, couldn't do a thing once Leafy Master used is powers on him.

He first reveals himself in episode 27 when T.P.Lady attempts to acquire Nightcap after Talen traps everyone inside a book, leaving T.P.Lady with no means to capture Nightcap nor a means to escape from Genshi.

He is seen every mission then on after until he is then overpowered by Cocoron, Mosbee, and Dipper in their Super forms in episode 31, and sent flying into the dessert. After T.P. Lady abandons him, he is seen returning to Masked Man, who recalled him to The Land of Dread so he could rest, Deathdas replaced him.

He is later seen with the rest of the Great Four when the Masked Man prepares to invade the Land of Time. Eventually, they decide to change back into their true forms as roses following the Masked Man's defeat.

Since he spent so much time transformed, the English dub calls him "Super Ninja" as a default name by mistake. He was the only member of the 4 to keep his bad transformations prefix of "Super", the others had their prefix of "Super" changed to "-con".

Despite his English-dubbed name, Super Ninja has not displayed any ninja-like techniques. He is actually patterned after the Kongōrikishi (金剛力士), which are two angry muscular guardians of the Buddha who are also called Niō (仁王), which is consistent with his original Japanese name. Like most Shifter, his name is therefore formed of a Word ("Nio") and an extra sound "ジャ" meaning "ja".