Orbit is a cheerful monster who likes to cheer people up with her powers.

Orbit has the power to make anyone feel positive, even in dire situations, cheering them up when they get too depressed to continue. She does so by casting light over them.

She can also attack by sending out a star, this showers a target in balls of light. 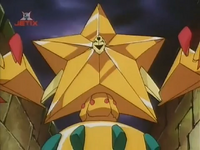 When she shapeshifts to Orbit-Con, she receives a new tank-like body. The green gems on the lower half of her body can be fired in rapid succession.

Orbit-kon also had the strength to break Getalong's love beam. 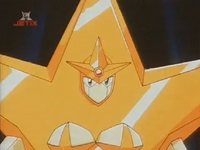 Orbit master has the ability to shine a brilliant light across an area.

Orbit was the last Shifter to be found. She was found in episode 36 still hurdling through the time line from the attack on the Land of Time. She aided Flint and his friends through the Underworld. While dealing with Nascal, Uglinator stamped her, causing her to attack. Flint freed her. When they faced Ominito, she transformed into her Master form. Sadly, despite her best efforts she proved useless in from of the Dark Lord and was captured alongside everyone else who was in the Underworld.

When the Shifters attempted to fight the Dark Lord and were all transformed by his mask, Orbit was caught up in the beam and became evil once again. Flint freed her and the other Shifters and she decided to stay int he Land of Time with the others.

Like the majority of Shifters, in the Japanese dub her name is made up of a word+ an extra sound. In this cause "Comet" and "to".