He resembles a turtle.

Early promo art shows his Super transformation as similar to what was seen in the anime. However, the anime version is more slender and humanoid-like, while the prototypes feature it as more shorter limbed.

Raldo and Petra in the manga

all forms of Raldo from a magazine showing concepts

Rado is a loyal Shifter who befriend Petra Fina Dagmar as a child. To the point where he defended her childhood even after knowing how she turned out.

Raldo was shown that when faced with someone he couldn't beat, he simply went into his shell and refused to fight. Mimicking the turtles habit of hiding in its shell when faced with danger.

Release a beam in his heart-shape tattoo. Once hit by the beam, may turn someone into small figures and trap them in his shell. Despite resembling a turtle, he cannot swim. His shell is also reflective and can reflect beams away from him. 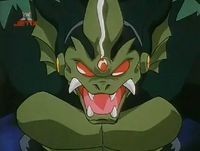 Raldo-kon can transform into a rolling ball. He was able to beat Elekin-Master. 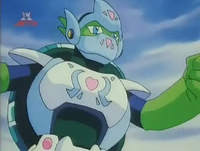 Raldo Master resembles a knight. Its chest fires a beam which can crystallize others. It was easily defeated by Leafy-kon.

The translation of his Japanese name is "Herald".