He creates clones of people by touching their shadows. The clones have the same abilities as the original version, but Shadow can mimic different aspects of a persons' personality. For example, Musashi's clones were more battle ready then he was when Flint first met him. Yamato Sora's clones exploited Narugami Kyoichiro fondness of her and Kyoichiro's own clone was less merciful. Though as seen with Kyoichiro, the clone is overall on par with the original's abilties, their more battle-ready nature means their slightly more ruthless nature can best the original.

The clones are dispersed if they are defeated. 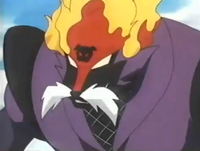 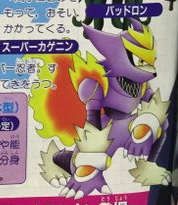 This form was featured outside of the show and is human-like in appearance.

His name follows the typical naming scheme of the Shifters in the Japanese dub, though instead of 1 word being used + 1 extra sound. His Japanese name is constructed of the Japanese word "Kage" meaning "shadow" and the triphone "nin". "Nin" is likely from the word "ninja" of which he is based upon. His name means "shadow-ninja".