Talen's original design can be seen in episode 1, episode 2 and episode 23. He was originally brown.

She is based on a fox spirit. The multiple tails of Talen's Kon and Master forms, as well as the ability to take on a human form within a story, are references to the nine tailed fox.

Talen in a human disguise within a fairy tale

Unlike most of the Time Shifters, Talen is shown to be very shy to the point of cowardice. Talen was the only Shifter summoned who did not at least attempt to aid Flint, to the point where Talen took her own failure harshly when it was mentioned. She was the only shifter to consider running away of those who were rescued by Flint himself. Talen, along with the also cowardly Jitterbug, eventually overcome their cowardice.

In the manga, Talen doesn't like fighting and is more of a pacifist, compared to the keen Jitterbug and Bubblegum. In fact she hid from Jitterbug and didn't even attempt to resist Bubblegum.

She has the ability to go inside of the books or stories, but otherwise doesn't have any powers that are considered "battle ready". As Petra points out the one time she is sent to help Flint, this made her quite useless. Her lack of battle readiness also was noted in the manga, leading Mite to trick her in order to get her perform.

While inside a story, Talen can not only rewrite the story, but she can become characters within the story. In the Japanese dub, while in the disguise of a character, Talen was fully capable of human speech. 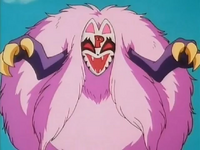 Talen-Kon can use its tails and make them pointed, attacking with them in a jabbing manner. In the manga the only attack she does is to spin her tails around her body.

It should be noted that Talen-Kon in the manga was not fighting 100% as well as it could due to the influence of the drugs used to make her transform. 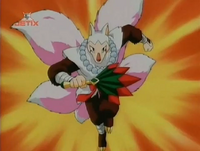 Unlike normal Talen, Talen Master is a more imposing fighter and quite agile.

She originally appears in chapter 4, where she lets Petra rewrite the stories of Hans Christian Andersen. When facing off again Bubblegum and Jitterbug, she was quite useless and Petra becomes angry at her unwillingness to fight. Mite then hands her some food which makes her transform, due to the fact the food had a drug in it. However, despite this, she only attacked because the drugs impacted her vision of Flint, Jitterbug and Bubble gum making it look like they had multiple heads, though was able to still fight.

Talen is left behind in Chapter 5 when Flint goes after Coconaut. This was due to the fact she was beaten up during Bubblegum and Jitterbug's fight over breakfast, even though both she and Getalong protested and did not get involved with the fight.

Talen first appeared in episode 4. After being persuded by Petra and her two henchmen, she leaps into a book contianing the Taketori Monogatari fairytale. Petra and Flint also end up in the story. Flint tracks her down and convinces her he is her friend. As Flint and Talun leave the storybook, Petra grabs Flint so she isn't left behind. Once back in the real world, Talen is kid napped by Petra and transformed into Talen-Kon. Flint rescues her, helping her to transform back to normal and takes Talen home.

She appears again in episode 10, where she is summoned to aid Flint when Petra tries to steal Getalong. When Petra points out that a storybook Shfiter is useless, she runs away in fear, leaping into a nearby storybook and disappearing, taking Pterry with her and preventing Pterry from summoning another Shifter to help.

In episode 14, this came back to haunt her as Miss Iknow (Petra in disguise), brings up Talen's cowardice in a bid to confiscate the Time Shifters. This causes Talen to feel down and she desires to leave. She is stopped when Flint and the other Time Shifters show their support for her.

In episode 22, she and the other Shifters go looking for Rocky Hammerhead after he goes missing. When Petra's henchmen Dino and mite show up, everyone is captured besides her and Jitterbug. The pair transform into their master forms and eventually after Rocky is freed from Petra's control, Petra is beaten.

She next appeared in episode 27, when she stowed away in a story book because the others were going to meet famous author Hans Christian Andersen. She traps everyone in a book containing the authors stories. After she changes into Talen Master, she and Flint end up fighting each other when Nightcap-kon uses its powers to convince the pair that the other is Super Ninja.

Her Japanese name follows the normal naming scheme for Shifters, being made up of the word "Tail" (テイル), plus an extra phonetic sound "ン".

The name is a pun as it can also be written to translate as "Tail down" referring to the way a animals such as dogs submit to a superior member of their species by putting their tails down and even fleeing, it is also likely why Talen is depicted as a coward within the series.

Also, the word "tale" in English sounds phonetically identical to "Tail". Since the series is known to use random English, this is also likely the source of Talen's abilities to jump into "Tales".

Retrieved from "https://flintthetimedetective.fandom.com/wiki/Talen?oldid=8005"
Community content is available under CC-BY-SA unless otherwise noted.