Though their forms remained the same, their Super and Bad transformations had much of their detail overhauled from prototype to final. In the Super form, various symbols were changed, as well as the sword, while the Bad form had its legs and poleaxe altered making it less millipede-like and more scorpion-like. 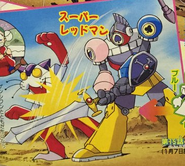 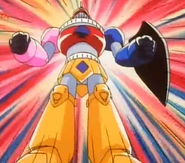 Super form as seen in the anime 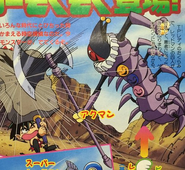 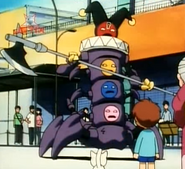 Bad transformation, as seen in the anime

The Cardians work as a team and were depicted as a group of highly keen individuals who were quite a handful to interact with. They often were seen disregarding other Shifters, often knocking them aside while doing whatever the 4 were up to. As soon as danger occurs, they take any measures to overcome the threat; even if the results cause unnecessary damage that could have been avoided (e.g. destroying an entire sink to get a bucket of water to put the fire in a frying pan out).

Their keenness can even cause bigger issues, as when called to fight Elekin-kon, all 4 rushed in together without even considering any form of plan of action. Their keenness also meant they were up for anything and often when Flint was given his missions by Jillian Grey, they were the first to try and offer help.

At the end of the series Moah, Monk and the Cardians were the 3 who stood ready to battle the Dark Lord when he tried to get into the Land of Time's clock, demonstrating that they are among the Shifters most ready to step up to a challenge.

The four work as a team and acted like a super hero group. Blademan, Thud and Arrowman acted as the main task force while Snapper recorded their exploits. 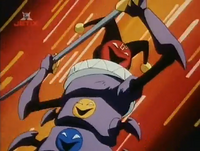 Resembles a jester-like centipede. It attacks mainly with its scythe. It can break apart to attack with each segment. 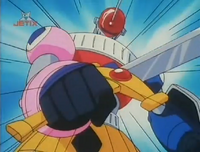 They first appeared in episode 15.

They were sent to fight Elekin-kon in episode 20.