Early concepts showed a paler green colours in all forms. Also his hat was more purple. His Super form received the most tweaks between early and final versions. 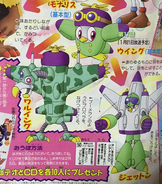 Wing as seen in a magazine showcasing concepts from the series

Wing was seen a number of times throughout the series and was Tony Goodman's favourite Shifter.

Wing has the ability to fly and can also let other people fly just by touching them. He is a natural born flyer himself, though in his normal form cannot out pace Unita in its master form. 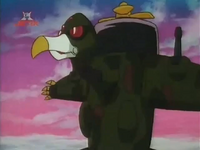 As Wing-Con, he is able to fire propellers and darts 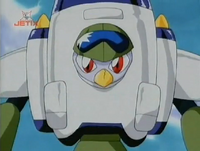 Wing Master was a faster flyer then normal Wing, able to out pace Unita Master and other flyers.