He is based on a wolf and models on the "Wolf spirit" known as a "Ôkami" (written as 狼 meaning "wolf" or 大神 meaning "great spirit").

He has a collar around his neck.

In all but a few panels, his eyes are hidden from view.

He is fond of Getalong and prefers to work from a distance to aid Flint. He is fairly resourceful even using another Time Detective to get a message to Getalong.

Wolfen has the ability to walk on air. He is able to move quite quietly and is seen in Chapter 4 having left a note beside Getalong for her to find without Getalong even realizing her had walked next to her and left it.

All three forms have powers linked to the wind.

The collar around his neck allows the Old Timer to contact him.

He appears as a demon-like wolf. He fires a tornado blast from his mouth. 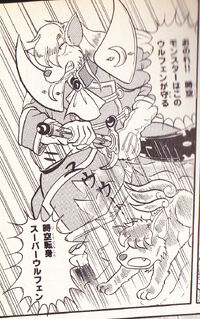 He appears as a wolf-man and is a swordsman. He is very swift and fast. He can use his sowrd like a boomerang.

Wolfen encounters Flint Hammerhead in the past in Chapter 1 of the manga. After the Time Shifters are attacked, Wolfen attempts to confront Petra Fina Dagmar and transforms into his Super transformation. Unfortunately, upon his attack, he is stamped with the Petra Stamp. He later appears to attack Flint. He is defeated and reverts back to normal.

When a nearby volcano erupts, he uses the Petra gun to turn Getalong, Flint and Rocky to stone.

He makes a brief appearance in Chapter 3, when he saves Getalong from Jitterbug-kon.

In chapter 4, he relays a message to Getalong with help from Merlock Holmes, he then explains to Bindi and him why he will not just appear to Getalong.

His name follows the normal "Word" + extra sound method of writing the Shifter's names. In this case it is the word for "wolf" ("ウルフ") + "en".